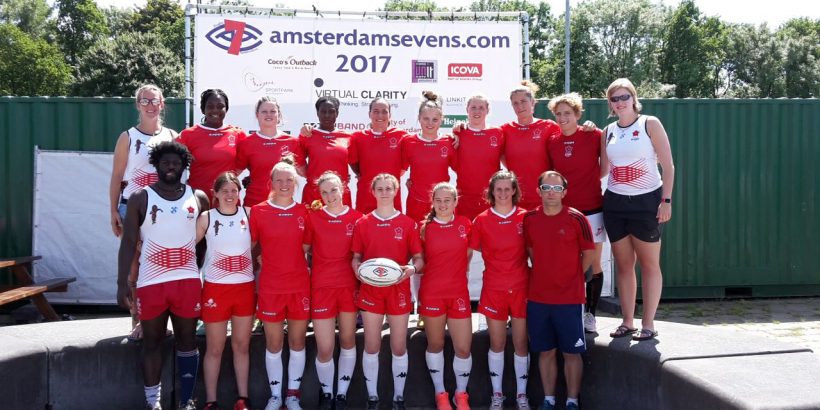 We are proud to announce the selection of Carole Casparis (captain), Selina Fux and Oumou Barry for the Sevens National Team to represent Switzerland at the 2017 Women’s Sevens – Trophy round 1.
The 2017 Women’s Sevens – Trophy is a 2 legged competition with tournaments in Ostrava (Czech Republic) on June 10/11 and Estergom (Hungary) on July 22/23. In the Trophy the European places 13 to 24 will compete to advance into the Top 12 division.
The Swiss Team will meet Finland, Hungary and Malta in their Pool games on day 1 in Ostrava this coming weekend.
For more information on the Trophy, please see http://www.rugbyeurope.eu/competitions/2017-womens-sevens-trophy

The selected Dangels
Being one of our most experienced and successful Dangel ever, Carole Casparis was not only selected but will lead the Swiss National Team as captain. This will be her 11th European Championship with the Swiss National Sevens team, not counting in her appearance at several international tournaments with the Swiss Babarians, The Susies Sevens or the XVs National Team and we are confident that she will lead the team magnificently with her lion heart once more.

Oumou Barry, only joined the Dangels the previous season after continuous requests (or begging) of some Dangels she met in a Fitness Centre. Being the natural talent she is, she was invited shortly after to also join the National Squad and will now play at the European’s Sevens Trophy for her first time. We wish her a successful tournament and fun on and of the pitch with this new experience.

Selina Fux, is our newest Dangel, but with her 9 years of Rugby experience already a highly valued peer. Before she joined us, she played for Bern and had several appearances in the Swiss National Team – this will be her 3rd Sevens European Championship. We are proud having you on the Dangels Team and representing Switzerland. Have great tournament with no injuries and keep on smiling on the pictures 😉

Special Thanks goes to Rini Souren. Moving from the Netherlands to Switzerland last year, she immediately joined the Dangels, her first Rugby experience as she was a very good Judoka back home. When she was approached to become the Team Physio for the Swiss Women’s Sevens (they must have a soft spot for Dutch physios ?) she was willing to spare her free time to go to trainings and he tournaments. Instant Rugby Love – Thanks you!

We wish you and the Team safe travels and a successful tournament! Enjoy!