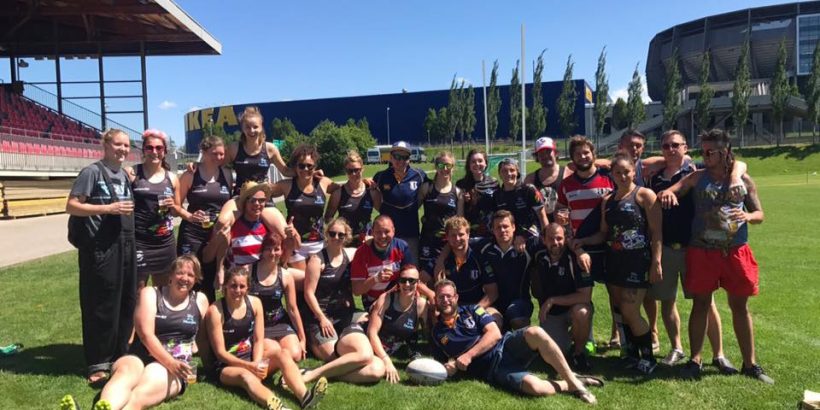 The Bishop’s Cup in St. Gallen was as always a highlight in the RCL calendar.
19 Dangels and 17 men travelled this year to the 10th tournament. Unfortunately both team had only 14 players.
16 men teams competed for the Bishop’s Cup this year including international teams from Russia and Czech Republic. The RCL team became second in the pool phase, but they lost in the quarterfinal against a team from Germany. The evening was celebrated in the Spirit of the theme “Rednecks”. On Sunday, the RCL men team made it to the 6th rank.
For the first time 12 women teams competed for the Cindy Trophy. In their first encounter, the Dangels met the Cindies from St. Gallen. The 4-1 victory, however, clouded Marlens’ drop out because of a broken nose. Against the team from Freiburg the Dangels won 2-1 and against McFly from St. Louis 3-1. Therefore, they were pool winner. Also the quarterfinals they won 4-1 – against which team the author does not remember any more. However, this has nothing to do with the following – awesome – party. This year, the Dangels celebrated the “Dia de los Muertos” in style with skulls – and one Smurf.
On Sunday, the Dangels were weakened by some injuries from the previous day. In the semi-final against StuSta, a strong team from Munich, they lost 3-2. This meant that the Dangels could only compete for third place. They won against Freiburg, thanks to some support from the Basel team. With the 3rd place the Dangels was the top Swiss women’s team of the tournament.