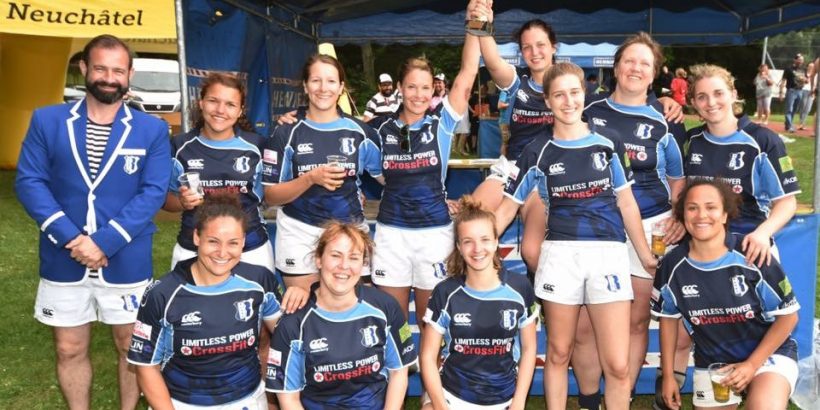 Tournament report
Early in the Morning this Saturday it was time to return to Neuchâtel once more, where the first of three Super 7’s tournaments would be held. The goal was simple: improve from game to game. So we started into the tournament with twelve excited players, a coach and loads of sunscreen.
The first game against Zurich was a great start, having won with six tries to zero, but already we returned to the shade with a broken finger more on the list – get well soon, Mac!
Luckily there were less injuries from our side in the following two games against the Switzers and Alba Lausanne. We won both of them and therefore qualified directly for the semi-final, not having to win another game before as we were on top of our pool. This meant a pretty satisfied coach and a well-deserved, long lunch break.
So after said break it was time for the semi-final against Alba Lausanne. We were aware of how they played and felt well-prepared. But the team in front of us was stronger than expected and the regular playing time ended in a tie, a Golden Try would decide the winner of the game. We had to take this last chance to make it to the final, and we did – quick and easy.
With just three substitutes left we walked into the final. The Super 7’s had already been won as no other Swiss team made it to the final game. Like last year, we played against the concentrated French weight of the women from Pontarlier. There was no pressure from the official championship anymore, this was all about honour. Losing another final against them would’ve been horrible so we did what needed to be done to prove who the real winners are. With two tries to one and our goal achieved we could walk/limp/crawl off the pitch proudly in the end.
The cold beer was definitely well-earned and even the coach was finally happy, unfortunately there were some more injuries – good and speedy recovery to all of you!

A third of Mission Super 7’s is achieved and we’re already looking forward to Neuchâtel next year.