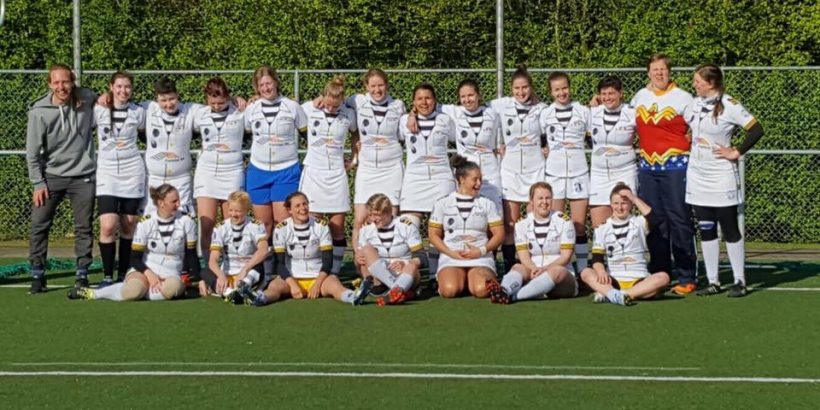 After our trip to Nimes last year, Jasabi decided that the Dangels return to Ghent over the Easter days.
On Thursday evening, 13th of April, we started our journey in Lucerne. Shortly before our arrival in Ghent, we gave everyone his/her individual “Brechi” and marked our “Tour-Virgins” with swimmies. Then we could deposit our luggage in our accommodation – we had a whole house for us alone – and went to town. Later in the afternoon, we celebrated Nicole’s Birthday with an aperitif in our house. We ate our traditional dinner at Amadeus: Spare Ribs à Discrétion and finished our day with a good schnapps from the legendary Dreupelkot.
Due to our Game-schedule, which we received just the day before, we went one hour later to “Le pain quotidien”, where we ate breakfast. Back in our house, we had just short time left to get ready and pack our bags for the day. We played three matches, every game against a Belgian team. One win, two defeats. Unfortunately, we had a bad injury in the team: Henni hurt her knee and will be receiving surgery soon. We fought hard and knew after some analysis from our sexy coach Cynthia, where we can improve the next day. But first, we got some Kriek (famous Belgian cherry beer) and a good BBQ before we danced as Cowgirls and Indians through the night.
After a short night for most of our Dangels, we were ready to rumble. Unfortunately, our opponent was too hung-over to start our first game on time. Cynthia did spontaneously a great job as referee and we could play a friendly game. The final we played against the Ghent team. We really improved during the game (and the whole tournament) and everyone performed well. In the end, we achieved the second place but stepped all proud, happy and smiling from the pitch. Back in town, we ate dinner at Mosquitocoast. It was delicious and they made great Mojitos too. Some of our party-people went out for the tournament-after party at Charlatan.
In the early Monday morning, some of us got up to have breakfast for the last time. After packing our bags and tidying up the house our bus left at 8.00 a.m. Our Ghent-Easter-Tour ended after a sleepy ten-hours-bus-ride back in Lucerne.
Ghent – we had a blast, see you hopefully next year!