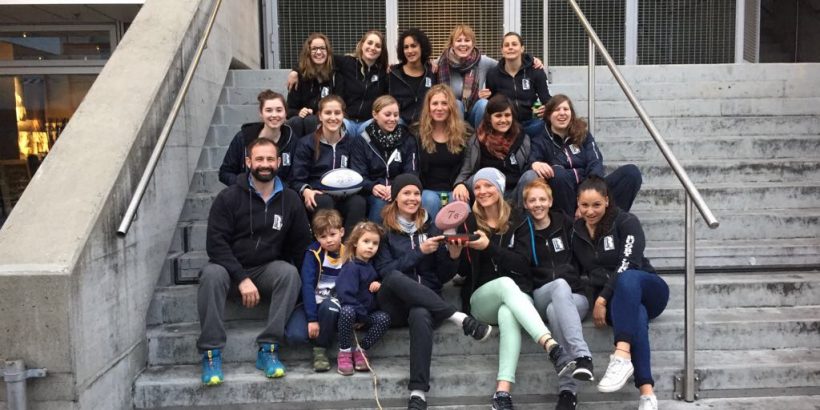 The Dangels finished their 15s Rugby season by winning back the Swiss Champions title. Now it is time to start winning the Sevens title back as well.
“Rugby sevens is a variant of rugby union in which teams are made up of seven players playing seven minute halves, instead of the usual 15 players playing 40 minute halves. Rugby sevens is administered by World Rugby, the body responsible for Rugby Union worldwide. The game is popular at all levels, with amateur and club tournaments generally held in the summer months. Sevens is one of the most well distributed forms of rugby, and is popular in parts of Africa, Asia, Europe, and the Americas, and especially in the South Pacific.[2] Rugby sevens is commonly referred to by rugby union media and fans as simply “sevens”.
Rugby sevens originated in Melrose, Scotland in the 1880s; the Melrose Sevens tournament is still played annually. The popularity of rugby sevens increased further with the development of the Hong Kong Sevens in the 1970s, the World Rugby Sevens Series in 1999, and more recently with the 2009 vote by the International Olympic Committee to bring rugby back to the Olympics beginning in 2016.”
(Source: Wikipedia https://en.wikipedia.org/wiki/Rugby_sevens#Playing_area)
Chris Stuart took over training and the Dangels are focusing on their Sevens game, agility, passing and speed. Clear goal set by the Coach and the team is to win back the Swiss Sevens Title.
Safe the dates for the 3 legged competitions:
3rd June in Neuchatel
24th June in Zug and
1st July in Basel.
We looking forward seeing the Dangles play Sevens and we´ll keep you posted on the Dangels performance.