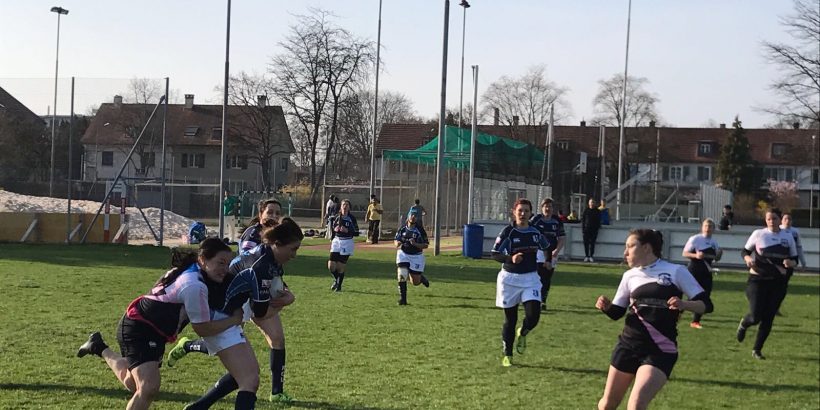 The Dangels kicked off the second half of the season with a development tournament – a good opportunity to refresh the rusted abilities and gain experience. With a team of eight players and two U18 players including supporters and coaches the Dangels travelled to Winterthur on March 25th. Unfortunately, such a small team also meant that they could only play 7’s, not 10’s as expected.
In the morning there was a two-hour training session for everyone, with the coaches of all teams actively supporting. During this training, many basic skills were repeated, from tackling to passing, rucking and mauling, as well as scrum and line-out. For all the players the training was a good experience – even for those who have been playing for a long time. In future, there will be a training session at all development tournaments.
In the afternoon, the U18 separated from their teams and performed their own tournament. The others dedicated themselves to the 7’s games. The Dangels first met the Basel Birds. It quickly became clear that the usual teamleaders were missing and so their game was quite disorganized. This and a lack of tackling led to a 3: 5 defeat against Basel. Organization and tackling worked much better in the second game, which resulted for the Dangels in a victory against Konstanz-St. Gallen – a highlight of the tournament, which was followed by the low point. After a long break, the players were tired. This was very unfavorable as they met the physically strong Nyon-Monthey in the next game. Instead of avoiding the contact, the Dangels got sucked into their strength-consuming game, which resulted in a defeat. However, they were then warm up for the last game against Bern. Here, the Dangels were able again to play their game and laid a few trys especially in the first half. The game was so balanced that in the end no one knew who had won. People said later that Berne had triumphed, but this could also be based on a rumor. Since points in the development tournament are not important, it is idle to get to the bottom. Fact is: the Dangels have learned a lot and are warmed up – the season can start!
Marlen was chosen as player of the day. She is back again after a long break and showed a great performance.