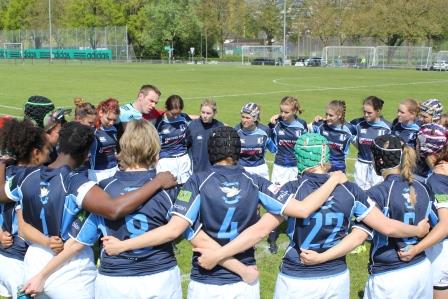 In nice weather, the Dangels met the team from Bern / Yverdon. For the Dangels it was the game of the season: After the unsatisfactory forfait in autumn, they finally met the last year champion. Both teams were hungry for the game. Their hunger, however, was stopped at the beginning of the game, as both teams fought with the rules: The referee distributed Penalty after Penalty. Although the Dangels took the lead and scored a try after 30 minutes thanks to good teamwork and a breakthrough from Carole, the game was very balanced – the players moved mainly in the field center. The many Penalties resulted in both teams collecting cars; the Dangels one white and one yellow, Redzone one white. In the meantime, a long, difficult phase happened in front of the Dangels’ tryline. However, they defended in with one woman less and left the opponents no way to score. Score at half time: 5: 0 for the Dangels. After half time, the Dangels’ game was more structured, they dominated clearly. Several trys were made. The Dangels played nicely together, several people made breakthroughs. For example, Sina ran across the whole field without being caught. The morals of Redzone crept visibly. It was not until the end of the game that they became dangerous again and used the fatigue of the Dangels. After a delicate phase in the Dangels’ half, their defense was weaker than at the beginning, Redzone made a try just before the final whistle. The game ended 29: 5 for the Dangels. It was a tough but fair fight. For the Dangels, this victory means that they already saved the championship title 2017 already, even though the last game of the season has not yet been played. Players of the day were announced Captain Sarah Stuart and Oumou – both had shown an excellent performance.