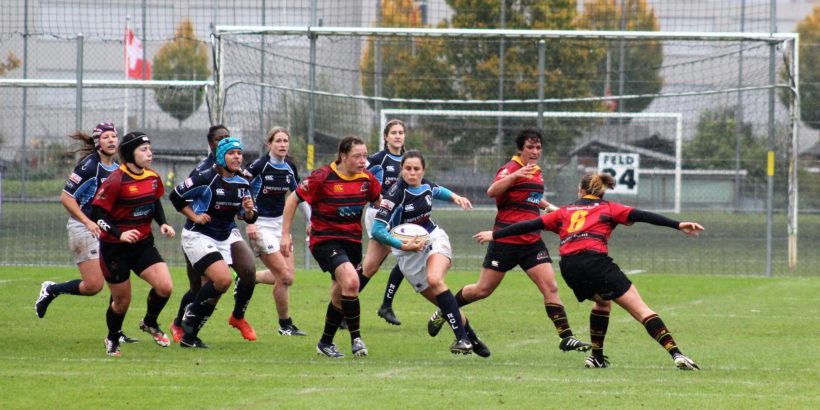 Game Report
Meeting the Redzones from Bern and Yverdon, the Dangels welcomed yet another strong opponent on the very rainy Saturday in Lucerne. Although the wet and cold weather did not make it easy for them, the Dangels managed to win another game without counter points – the fourth in a row. At the beginning, it did not necessarily looked that way. As often, the Dangels had starting difficulties, were unfocused and seemed to have forgotten many things that they trained in the last few weeks. They let themselves be put under pressure by the Redzones, had to defend long phases and in attack they often lost the ball. A breakthrough from Esti lead almost to the first try. After that, the Dangels were able to control the game better. Unfortunately, Sarah Mac got a white card for being offside. Shortly before halftime, Esti was able to break through again, and this time made the try. At halftime, it was 7-0 for the Dangels. Thanks to Coach Billy’s wake-up call, things went better in the second half: Defense and attack were more consistent, and there were fewer penalties against Lucerne. Selä turned a penalty kick into 10-0. Finally, she also managed to make the try to raise the to 15-0. There were still about 20 minutes to play when the game was interrupted for a while due to an neck injury on the Bern time. She had to be picked up by the ambulance, luckly nothing serious, as we heard after. As the game continued, the Dangels could continue playing consistently, but without any more points. Then Sarah Stuart had to leave the pitch for ten minutes with a white card. The last attack of the Redzones brought the Lucerne again in distress – but after ripping the ball a rescuing kick ended the game. The Dangels won 15-0.
Wings: Elmi – for outstanding playing
Horns: Sarah + Sarah – for getting older and taking a 10 minute break, both!