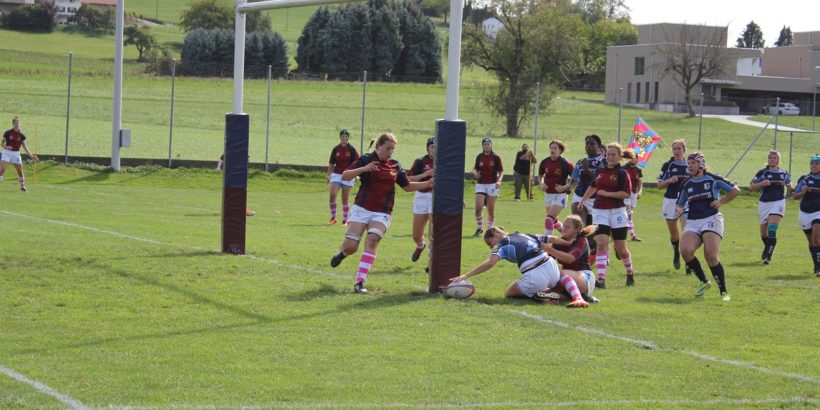 19 Dangels (15 for playing and 4 supporting, without coach) went to the second game of the season, held in Würenlos against newly formed WüriZüri (ZH Valkyries). The games started showing a dominant ball carrying by the Dangels, but also a very strong defense by WüriZüri. It took 38 minutes bevor Esti could score the perfect try (see picture) after the Dangel’s penalty move. After conversion by Selä the scoreboard said 0:7.
The second half showed more ball possession of WüriZüri and the well trained, strong Dangels defense was challenged. In between Oumou showed a nice run. The game began to become messy and cards has been awarded on both sides. Defending the own try line for about 10 minutes, Oumou received the first yellow card in the 60th minute, 2 minutes later Marlen got the second yellow card for a high tackle. Big shit – I swear.
But the Dangles fought like there’s no tomorrow and even with 13 against 15, they managed to push the opponent back from their try line over and over again. Just as Oumou went back on, Selä got the white card for the team…
WüriZüri almost made it to the try zone after their winger broke a tackle, but Jasi could finish the game with an all-pressure-releasing try-safing tackle.
Final score: Dangels 7:0 WüriZüri

Angel: Mire, for playing with us even though it meant leaving her mother’s post wedding brunch earlier. Thanks!
Devil: Oumou for constantly coming in from the side to