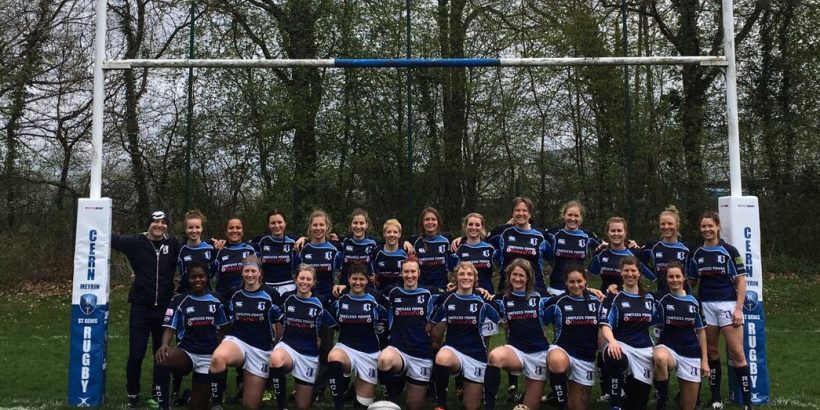 In their first league game after the winter break, the Dangels met the Cern Wildcats in their new jerseys. Luke Smith, who had a brief comeback as a coach, accompanied the 22 players. April 1st presented perfect rugby-weather: not hot, but dry. After the victories of autumn, the Dangels knew that they had to dominate from the beginning of the second half of the season in order to have a chance at winning the championship. And Cern is an opponent who should not be underestimated. This was already shown shortly after the whistle: Geneva lined up with a well-trained team. From the start, the game was very balanced: both teams had breakthroughs, which could often only be stopped in the last second, both showed good teamwork within the team and full commitment. With the scrums and lineouts Cern had progressed very well, which made life difficult for the Lucerne Forwards. In the middle of the first half, the Dangels made a breakthrough through, especially the backs worked great together, and Sela – our newest Wing – made a try. Shortly before halftime, the Dangels were in a difficult situation: the Wildcats had almost scored three points with a penalty kick, but luckily, it did not work out. Halftime: 5: 0 for the Dangels – no particularly comfortable lead.

The second half was much more difficult for Lucerne. Although the game was still very balanced, they were unable to break through to the opponent’s try-line. Again, it came to a penalty kick for Cern, which the good kickers made this time: 5: 3. A little later, the toughest 20 minutes of the whole game followed. The Wildcats were on the verge of the Dangels’ try-line all the time, but Lucerne defended it like lions. In addition, several penalties against the Dangels made the defense more difficult. With the last of these Penalties, Cern went for the goalposts, but the kick failed. This was the liberation blow for Lucerne: the game turned and suddenly it only took place in the opposing half of the field. A wonderful try by Lea sealed the victory. Final score: 10:3 for the Dangels. The tight result shows how strong both teams played and how hard they fought.

Oumou and Lala, who both performed excellently, were selected to be players of the game.