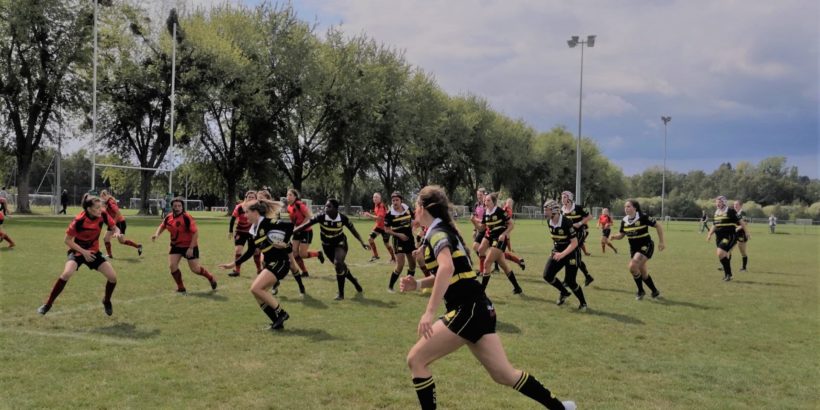 The first game of the new season for the Dangels took place in Lausanne. The team was accompanied by several injured players – even the head-coach came on crutches. For the first time, Coach Dave also accompanied them for an away game. Luckily, those who played were vigorous and fit. So the Dangels had a good start and pushed the opponents back into their half of the field. However, it took a while until the first try was made, partly because the Dangels had to finetune their interaction. This was expected based on a set up in the backline and adapted positions in the forwards. The spell broke after about 20 minutes: Winger Chantal made the first try in her very first game. The rest of the first half flew by. The Dangels were almost permanently in attack and could score points one after another: Oumou, Jasi, Judith and once again Oumou made four tries in a row. After the last one, Jasi, who was the kicker for the first time, scored the conversion. At halftime the score was 27 to 0. The second half was less successful. The Dangels were often on the defensive, because they slowed down in the rucks, and Alba could steal the ball. The defence was tiring, several times an opponent broke through, but each time could be stopped. Shortly before the end of the game Angie made the sixth try. So the Dangels successfully went home with a 32-0 victory in their pockets.