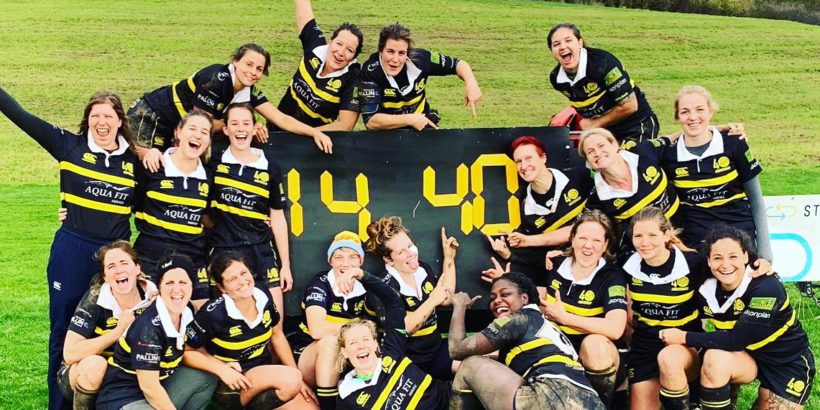 Victory in Berne – Thanks to team work
While the Springbocks won the World Cup title in Japan, the Dangels played against the Redzones in Bern. The weather was dry and pleasantly cool, but the pitch was pretty muddy.
Right at the beginning of the game, the Redzones showed, that they were not an easy opponent. Although the Dangels had little to blame as far as their defence was concerned, but after about 15 minutes the Rezones broke through with their fast wing and scored a try. The Dangels were able to compensate to 7-7 after a long attack phase, in which they needed a lot of patience. The circumstances – cold hands, slow ground – did not made it any easier for them. Ten minutes later, the Redzones made another breakthrough, again over the wing. But shortly before the half time, the Dangels scored again: After a long attack phase in front of the opposing Tryline Düsi made her first try.
At half time the scoreboard showed 14 to 14. The second half of the game was a lot easier for the Dangels. They could carry out their game and spent most of the time in the attack. In addition they could prevent the Redzones from using their wing. With four further tries they wore down their opponents. Especially great: All tries for the Dangels were scored through consistent and good teamwork – and all subs were given a few minutes of play. In the end the Dangels won confideently with 40 to 14.
Tries: Oumou (2x), Düsi, Julia, Tina, Angi
Conversions: Tina (5x)
Wings: Elmi (she is always there)
Horns: Oumou (Captain Julia always had to drink for her the last few times, because the opponents had chosen Oumou as the best player, but she always had to leave right after the match.)