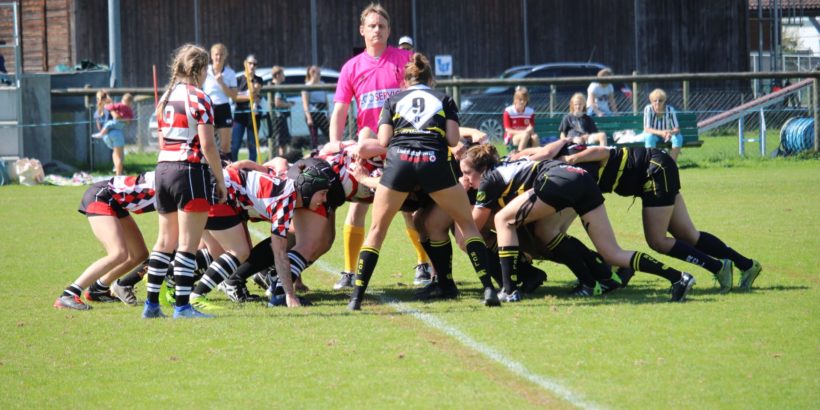 In most beautiful autumn weather, the Dangels finally welcomed they favourite Opponent the Birds from Basel on the Allmend Lucerne. The Basel-Girls used to play with the Dangels before they started their own team, the Birds, and qualified for the A-League last year, visibly hungry for rugby.
From the beginning, they caused trouble for the Dangels. Especially due to the fact, that the home team seemed to have forgotten all they’ve learned in the past weeks and months. In the first half, the Penalties for offside and high-tackling piled up. So the Birds, who played a lot more disciplined, succeeded to make the first try. The Dangels obviously needed this wake-up call and scored shortly after. Although they led from this point on, they showed a good game offensively, but they really could not dominate: Too weak was their defensive performance. At halftime it stood 14 to 10 for the Dangels.
The second half of the game was a lot more satisfying from Lucerne’s point of view. Slowly the Dangels got stronger. In the meantime, they led with 24 to 10. But they got thrown back again: The Birds, who have some fast players who are difficult to stop, laid two tries in a row and were with the 20:24 already close to equalize. But towards the end of the game their power subsided evidently in the Scrums which they had performed convincingly at the beginning of the game. So the Dangels were still able to extend their lead: in the end the scoreboard showed 36 to 20 for Lucerne.
Tries: Esti, Oumou (2), TazMac, Chantal, Angie
Conversions: TazMac
Wings: Esti
Horns: Wespi