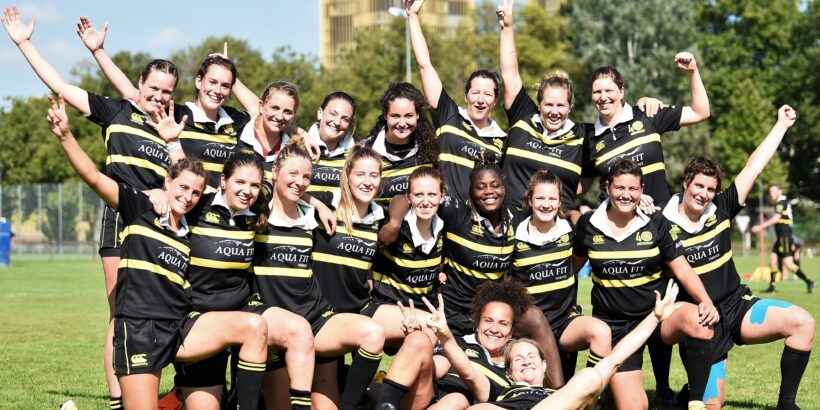 Almost a year without rugby! The Dangels have big plans for the upcoming championship and were hungry for their first game. A week earlier they were able to prepare in a friendly match against the Basel Birds and so they enthusiastically started the new season of the 15s league A on Saturday. In sunshine and with a large audience, they received the Mermigans from Nyon-Monthey on the Allmend in Lucerne.

And it looked good: The Dangels got off strong into the game and put pressure on the Mermigans. For the first ten minutes, the Mermigans had to permanently defend their own tryzone. But they did not make it easy for the Dangels and fought their way free. Shortly afterwards, the Dangels found themselves in defensive. But only briefly: After another attack phase, Kat was able to make the first try for the home team over the wing. With Tina’s successful conversion, it stood 7-0 for the Dangels after around 25 minutes. A difficult phase followed for the Lucerne team. In  attack, the support was often too slow, because the opponents quickly had their hands on the ball. The Dangels often lost the ball in contact and, to make matters worse, received numerous penalties. Even so, they managed to keep winning the ball back and not let the Mermigans get too close to their tryline. It stayed 7-0 up to half-time.

The second half of the game went a lot better for Lucerne. The Dangels reacted to the mistakes from the first half and kept the ball in their own ranks more often. So Sarah Mac could make the try to 12-0 in the 55th minute. Nevertheless, the penalties continued to pile up, and Carole had to leave the field with a white card for ten minutes. The Mermigans were able to use the deficit of the Dangels in their favor: A player broke through the defensive line of the Lucerne team and scored. After about 70 minutes it stood 12-7. But the Dangels did not allow more and as soon as Carole was back on the field, she made up for her absence – with a try shortly before the end of the game. The Dangels finally won 19-7.

Horns: Carole (for the white card)