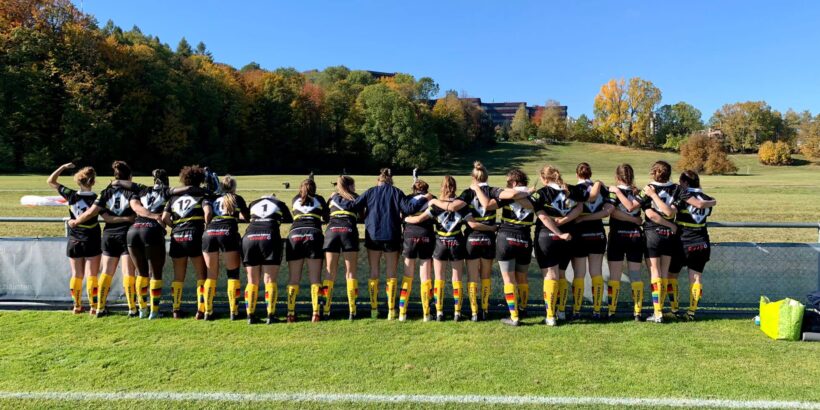 The sun was kind to the Dangels on October 23: after a tough but great game in Zurich, they were overjoyed to bring home another victory. They had resolved to play better as a team – for which they  got new socks from Coach Billy – and implemented this from the very first minute. The first try they made after just a few minutes of play was the result of a series of phases in which forwards and backs complemented each other. It went on in the same style until half-time – and everyone was surprised that 40 minutes were already up. Because thanks to the good team play, the first half, in which the Dangels made four tries, was less exhausting than in other games. At halftime it was 28-0 for Lucerne – also because Tina converted all conversions into points with some spectacular kicks. The Dangels started well in the second half of the game, but gradually began to show signs of fatigue. These manifested themselves on the one hand – as is so often the case – in the increase of penalties against the Dangels and on the other hand in the fact that they often came under pressure. Nevertheless, the Dangels stayed in the upper hand and Carole was able to make two more tries. In the last ten minutes, however, the Dangels could no longer hold their level. So Zurich managed to score in the very last minute of the game. The game ended with a 42-5 victory for Lucerne.

Wings: Esti (our no. 9, who is just everywhere)

Horns: Lala (for keeping the no. 8 shirt for months)

Special Thanks to Billy for the great Socks!